Things seem to be going pretty well with the new cat. He came with the name Oliver, which I liked. But Anthony really liked Blu-Ray so he and BlueTooth would be the Blues Brothers. So, he is now Ray. 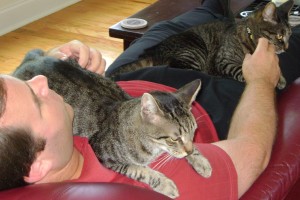 Once we decided to call him Ray, he proceeded to pee in a box under my desk and then yesterday he peed on our bed. I’m thinking he may prefer Oliver 😉

Some thoughts on why he peed on our bed. Marking his territory? Perhaps, but really the bed is ours and he’s allowed to spend time there, he needs to learn that. Jealous because we abandoned him to watch a movie? Doubtful, he spent the whole time curled up with one of us. Mad because we wouldn’t let him jump on the table and eat some of that delightful salmon fresh from the grill? I’m thinking this is it. He stomped off toward the bedroom to pout and I think he took revenge.

Of course, we didn’t discover it until time to sleep, so our evening was disrupted some. He also got Anthony’s pillow so I had snoring, cat pee smell, and BlueTooth making weird meowing noises while Ray stalked him. I finally went up to the guest bedroom to sleep. Then I got up this morning and did 3 loads of laundry. The sheets smell great, we’re still working on the bed.

When he isn’t making wet disturbances, Ray is actually a cute cat and he and BlueTooth are getting along better each day. Both of them were resting on Anthony yesterday afternoon and they aren’t as loathe to be in the same room together now.

BlueTooth tends to stay away, and here’s why. Wherever BT goes, Ray follows. But if BT curls up somewhere and goes to sleep, Ray will leave him alone to go find the action. Therefore, the only way to be alone is to be sleeping, away from us. Hopefully Ray will continue to calm down and let BT have some space once in awhile.

One game they play is entirely accidental. The sun will reflect off of BT’s tag and Ray will chase the light. BT is completely unaware that he’s the reason Ray is suddenly leaping all around the room. It’s pretty funny.

That’s it for now!

This entry was posted in Home. Bookmark the permalink.