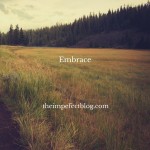 Today’s word is Embrace. I’ve been reading my Bible using he Dr. Horton’s plan, which is a chapter in ten different books every day. One of the books we started with was Job. I admit I’ve always struggled with Job. We talk about the patience of Job, but he wasn’t all that patient. He had some pretty hard words for God and his predicament. Now his friends were worse, but even they had some truth in their theology.

The main principle, per the commentary I’m reading to help me grasp this book, is the Retribution Principle. Which implies that God only punishes the wicked, which is why his friends seem so intent on telling him he has sinned somehow and needs to repent. But with that as the controlling angle of their argument, they aren’t facing reality. Job quickly points out how many wicked people have prospered, and good people have suffered. Obviously the Retribution Principle doesn’t hold up.

But Job figures something is wrong for him to be suffering as much as he is. The universe has gone wrong somehow and he wants a chance to point that out to God. The good thing that Job does is his only concern is to restore his relationship with God. He isn’t worried about the physical benefits of following God. This is what the accuser actually raised in the first part of the book. “Of course Job loves you, you have protected him and showered him with children and riches.” But Job proves God right, he doesn’t care about all that, he just wants to know what went sideways in his relationship with God.

That is restored in the end, and Job admits he must be silent in the face of God. He has no case to argue. God can do what He wills and we have no business complaining. This gets down to two different aspects of God. We have to trust Hhe is sovereign, He really is in control of all things and we can trust all events to His providence. But we also have to trust that He is good. We have to know that the way He orchestrates events is really for our good. Now we may differ on what our “good” is. We think ease and safety. He thinks transformation and recreation to reflect His glory and be like His Son who died for us.

We should be content in all things, because God has it all under control and He is good. I have spoken some about lament and when it is proper. I’ll hopefully speak more about that as the month progresses. For now, trust God. He is faithful!

This entry was posted in Write31Days. Bookmark the permalink.